Introduction to alchemy- The philosopher's stone

Download File
Today, the quest for the Philosopher's Stone is merely thought of as a work of fiction from the pages of a Harry Potter novel. However, in the Middle Ages, the very real search for the Philosopher's Stone was second only to that of the Holy Grail. It was believed that this mysterious stone which one had to concoct from secret ingredients could turn base metals into gold, and reveal the secrets of immortality. This fascinating documentary unearths the astonishing events surrounding this legendary stone, and the alchemists and adventurers who stopped at nothing in their search for this tantalising quarry. The programme also takes a wider look at medieval alchemy, and how this now-obsolete science paved the way for modern scientists. 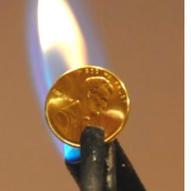 The history of chemistry includes many dubious periods where techniques for the transmutation of base metals into precious metals were promised to kings and queens. These deals tended to end badly (and bloody) for the “alchemists” who made the promises. They were promising chemical changes, but providing physical changes. During a physical change, some properties of a material change but the composition of the material does not change. We are going to see how some of these fifteenth century Royals were hoodwinked by replicating two of the alchemists “tricks”.

Alchemists in the Middle Ages believed they could turn ordinary metals into gold. In this lab, you become a 21st-century alchemist and turn pennies into shiny "silver" and "gold".