Electrolysis is the driving of a non-spontaneous chemical reaction by passing a direct electric current through an electrolyte. In electrolysis, positive ions migrate to the cathode and negative ions to the anode. The reactions occurring depend on electron transfer at the electrodes and are therefore redox reactions.

At the cathode (-) positive ions in solution can gain electrons to form neutral species. Cathode reactions are reduction reactions.

Electrolyte: A liquid that conducts electricity as a result of the presence of positive and negative ions.

Electrode: A conductor that emits or collects electrons in a cell. Usually an inert material such as platinum or graphite are used 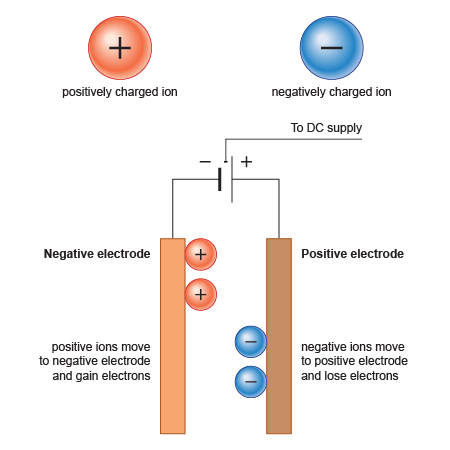 Predicting the products of electrolysis 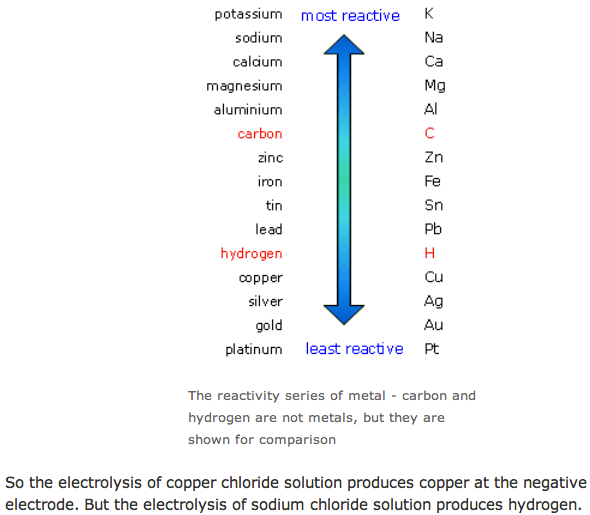 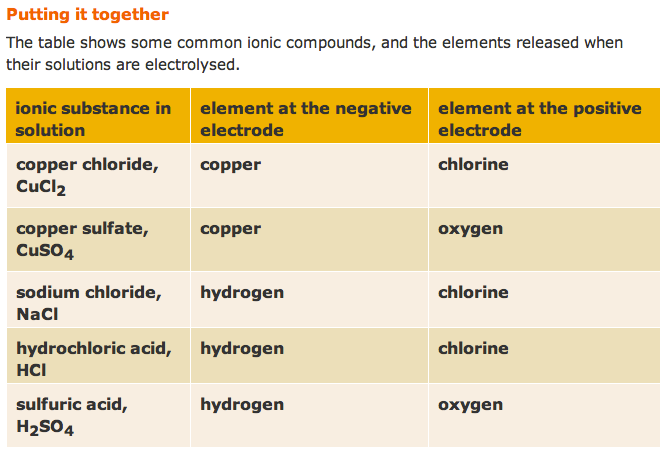 The Electrolysis of Water

In the school laboratory hydrogen and oxygen production via electrolysis is usually performed using a Hoffman Voltameter.

At the anode (+) water decomposes to form oxygen and hydrogen ions:

At the cathode (-) water decomposes into hydrogen and hydroxide ions: 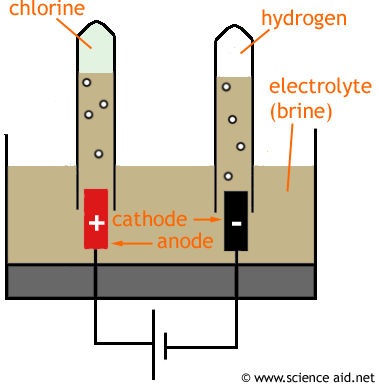 The cations move towards the cathode. So H+ and Na+ will go this way. The hydrogen gas bubbles up and is collected in the test tube. Pairs of H+ ions will from H2 molecules.

The anions move towards the anode. Cl- is collected in the test tube - it becomes Cl2 molecules, OH - also moves in this direction.

When the current is stopped the Na+ and OH- have no force holding them to their respective electrodes, so they will form ionic bonds together, making sodium hydroxide (NaOH).

Testing
To test for hydrogen you first take the test tube, then seal it. Now you get a wooden splint or match and light it. Quickly unseal the test tube and drop the splint in. You should hear a 'pop' sound as the hydrogen combusts in a rapidly exothermic reaction.

To test for chlorine you do the same as with hydrogen, but instead of a match, you drop a damp piece of litmus paper into the test tube. It should turn white because the chlorine has bleached it.

Sodium hydroxide is an alkaline solution so you can use one of the tests you know for that. Turning litmus paper purple or universal indicator turns the solution blue.

The electrolysis of molten lead(II) bromide 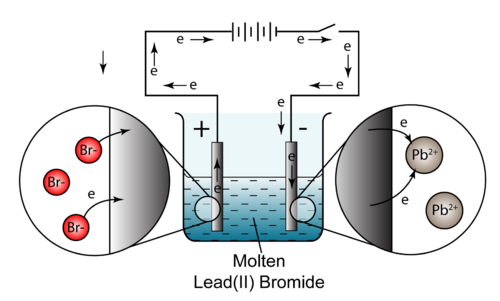 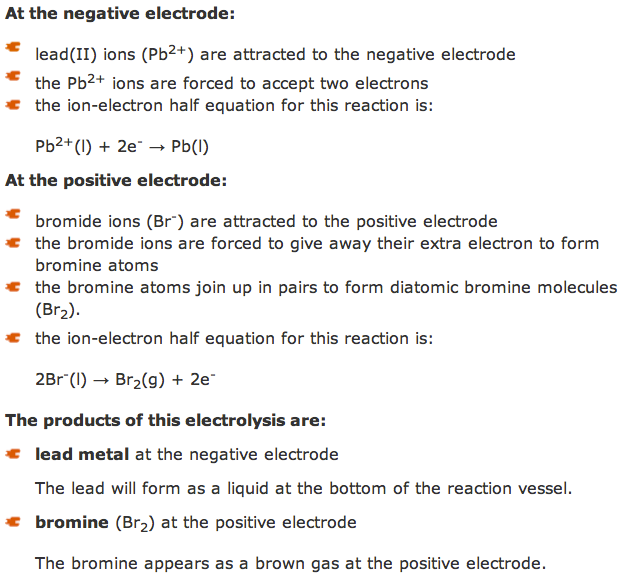 The electrolysis of aqueous copper chloride 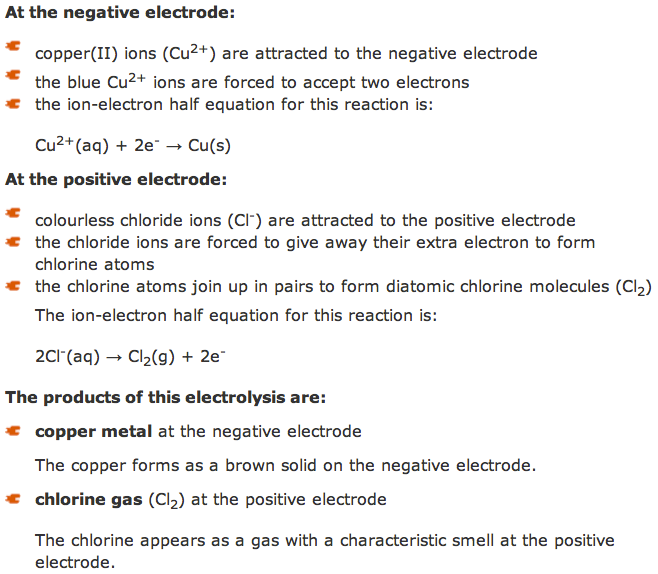 The electrolysis of dilute sulfuric acid 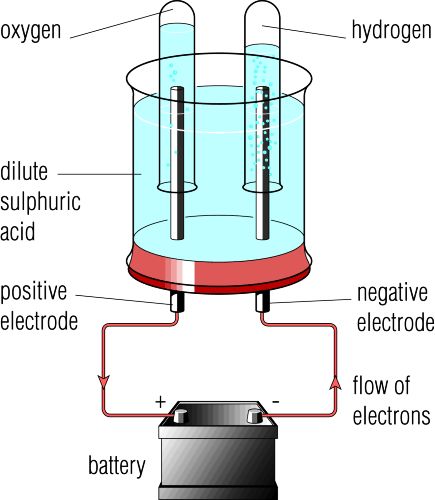 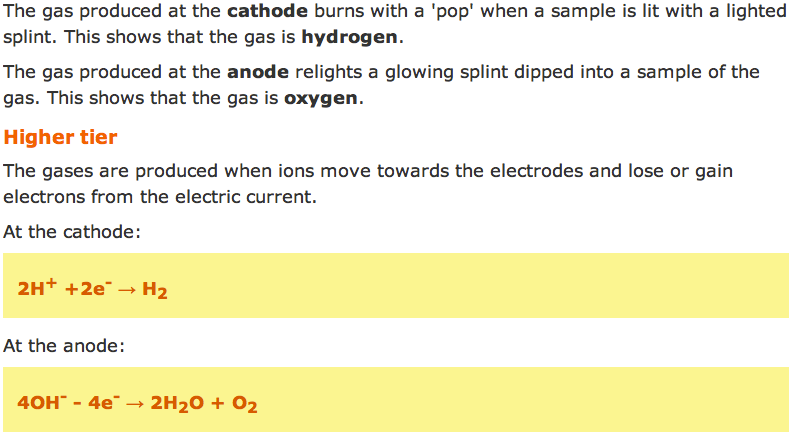 The electroplating of metals

Electroplating is the application of a metal coating to a metallic or other conducting surface by an electrochemical process. The article to be plated (the work) is made the cathode (negative electrode) of an electrolysis cell through which a direct electric current is passesd. The article is immersed in an aqueous solution (the bath) containing the required metal in an oxidised form, either as an aquated cation or as a complex ion. The anode is usually a bar of the metal being plated. During electrolysis metal is deposited on to the work and metal from the bar dissolves: