The moment of a force is the turning effect that it has. It is measured in newton metres (Nm)

The ability of a force to make an object turn depends on TWO factors:

This explains why less force is needed to open a door by pushing at the side furthest from the hinge than at the side closest to the hinge. To push at the hinge side of the door requires more force to be exerted because the distance is smaller.

A moment can be calculated using this equation:

M = the moment of the force in newton-metres, Nm

F = the force in newtons, N

d = the perpendicular distance from the line of action of the force to the pivot in metres, m

A lever is a simple machine that makes work easier to do. Examples of simple levers include cutting with scissors, or lifting the lid on a tin of paint with a screwdriver. Levers reduce the force needed to perform these tasks.

When someone uses a lever, they exert a force (the effort) around a pivot to move an object (the load).

Levers rely on the principle of moments to act as ‘force multipliers’ - they reduce the effort needed to move the load by increasing the distance over which it is acting. This means a relatively small effort force has a much greater effect. 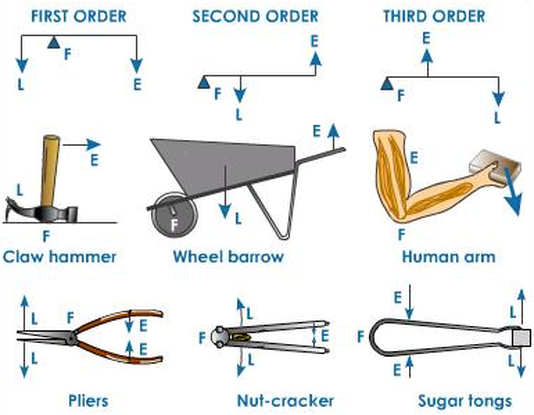